FT: A goal from Steven Bergwijn and a penalty from Bruno Fernandes mean the points are shared in London. Terrific final 20 minutes.

95: Moussa Sissoko, who has almost certainly been Tottenham’s Man of the Match, makes a sublime intervention to prevent Marcus Rashford from streaking clear of the Spurs defence. That might well be that.

93: After all that drama we are three minutes into an additional FIVE minutes of stoppage time.

92: I’m not trying to have a pop but how on earth could referee Jon Moss have given that in the first place?! VAR finally works. I will add that Jose Mourinho’s protest will become the stuff of legend. Coming to a meme near you. 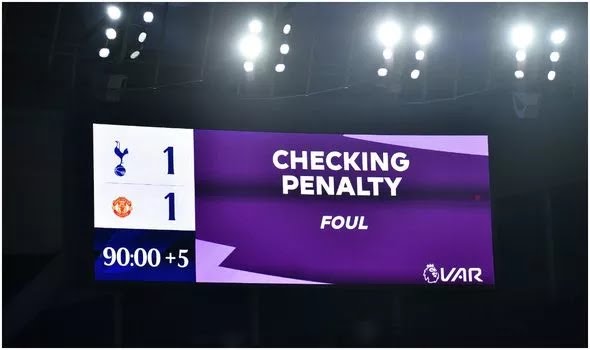 90: Would you BELIEVE it?! Manchester United have been awarded their second penalty of the evening. Jon Moss awarded it after what I’d call an extremely soft spot-kick. Eric Dier makes a small amount of contact with Bruno Fernandes. The smallest. In fact… he doesn’t even touch him as the Portuguese hits the deck.

It goes to VAR… overturned! Thank goodness for that. It would have been an embarrassment.

89: Spurs have clicked back into life again. A poor corner is headed clear by Bruno Fernandes but that is quickly followed by a free-kick within shooting range. Harry Kane takes charge of the situation and lays the ball down… blocked. Straight into the wall.

87: Well… it didn’t lead to a goal but Paul Pogba has just played the sweetest pass you’ll see this season. A 40-yard cross-field, half-volley over to Marcus Rashford. Davinson Sanchez did well to make the block.

85: Massive final five minutes coming up here, folks. A draw doesn’t do an enormous amount for either side – especially with Chelsea visiting relegation-threatened Aston Villa over the weekend. Son fires a Spurs free-kick straight into the wall.

81: GOAL! Bruno Fernandes is on penalty duty and the Portuguese midfielder makes no mistake. A goal created by Paul Pogba and scored by Fernandes – perhaps we’ll see a lot more of that in United’s final eight games. Fernandes rushes to retrieve the ball – he can sense a winner.

81: Well… Paul Pogba has certainly had an impact. The substitute was brought down by Eric Dier as he danced along the byline. Jon Moss points to the spot and VAR confirms it. Massive moment.

80: How huge a result could this prove to be for Jose Mourinho IF it stays like this? It would move Tottenham up to sixth – one point behind fifth-placed Manchester United and four behind Chelsea, who occupy the last Champions League spot. 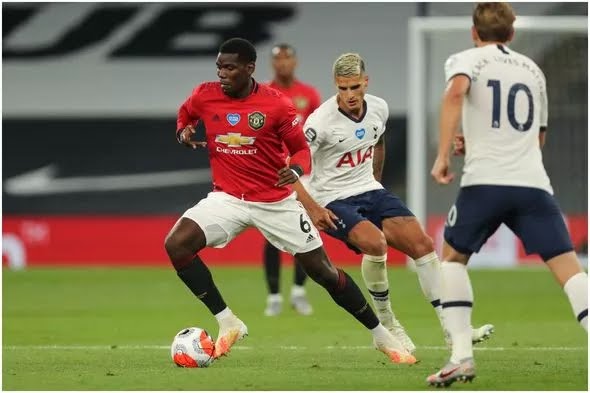 78: Tottenham have done well to halt the sustained Manchester United pressure. They’ve packed that midfield area and stopped the visitors from playing. Son has also done a job of winning fouls and keeping the ball upfield.

75: We have 15 minutes remaining in north London and Tottenham have a slender one-goal lead. This really is a match tailor-made for Jose Mourinho.

70: Manchester United pressure gives way to another drinks break. I think the sooner these are binned off the better.

68: Manchester United are all over Tottenham now and have been for five minutes. Serge Aurier somehow loses possession to Luke Shaw and the left-back squares it for Anthony Martial. He takes one touch before firing an effort that’s destined for the top right-hand corner but Hugo Lloris makes a stunning save. 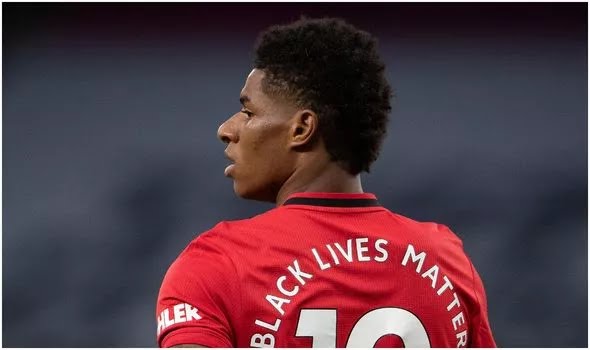 65: So… we’ve got the Paul Pogba and Bruno Fernandes show that Manchester United fans have been so desperate to see. They nearly combined to good effect with Pogba leathering Fernandes’ nudged pass against Eric Dier.

The England defender is involved again seconds later when executing an incredible sliding challenge to deny Anthony Martial. The Frenchman was sent clear through by Fernandes but Dier’s intervention was key.

63: Solskjaer’s seen enough. A double change incoming with Mason Greenwood and Paul Pogba coming on for Daniel James and Fred. Time to shine, Paul. A win here and I suspect all will be forgiven. Fred shakes his head as he trudges off.

60: Luke Shaw with a vital interception to prevent Erik Lamela from doubling Tottenham’s lead. Harry Maguire clumsily fouls Steven Bergwijn in the build-up but play continues down the left channel. Harry Kane sweeps a cross into the box but United’s left-back is there to prevent a tap-in.

56: Close! Signs of improvement from the visitors. Anthony Martial and Bruno Fernandes combine to good effect in a central position. The Portuguese fires inches wide from 30-yards out. “Faster, faster. Keep going,” says Paul Pogba offering some motivational words from the sidelines. 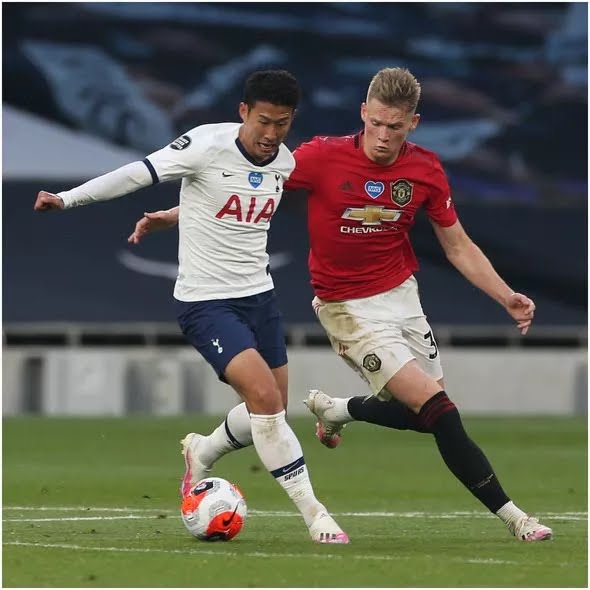 53: Harry Winks gives a needless free-kick away over on the right channel but Bruno Fernandes’ sweeping delivery is cleared. Tottenham waste no time in moving it upfield but Erik Lamela kills it stone dead with a rubbish pass.

50: Ole Gunnar Solskjaer to Anthony Martial: “Get in the box, Antho.” He didn’t. No sign of that spark from the visitors and that’s probably why Mason Greenwood, Nemanja Matic and Paul Pogba are all doing drills on the sidelines.

47: It looks like Ole Gunnar Solskjaer has moved Bruno Fernandes into a slightly more advanced role. The Portuguese midfielder tasked with clawing Manchester United back in to this one. Spurs remain nice and compact, looking to hit on the counter.

45: And we’re back underway folks. Paul Pogba was undergoing a rigorous warm up over the break – but he remains on the sidelines. No changes for either side.

Well it’s good to see that Roy Keane’s levels haven’t dropped. The former Manchester United midfielder has well and truly lost it with Harry Maguire and David de Gea. And when I say lost it – the guy gave the pair both barrels.

I’ve jotted down a few of the quotes, and I’ll get the rest of the transcript together shortly.

Keane said: “I’m shocked. I’m shocked at that goal. I’ve watched a lot of football over the years and to give away that goal…I’m fuming.

“I can’t believe that’s Manchester United. Shaw, heading the ball up in the air and then running forward, I am staggered at Maguire, how an international player can just get done like that and I am sick to death of this goalkeeper.

“I would be fining him at half-time, there is no getting away from that. I would be swinging punches at that guy. That is a standard save for an established international goalkeeper.

“I am flabbergasted. Maguire, and De Gea, I wouldn’t even let them on the bus after the match. Get a taxi back to Manchester. Do your job. We’re trying to get into the top four – never mind win trophies – shocking. I am disgusted, they should hang their heads in shame.”

HT: Serge Aurier swishes wide and that’s the break. An understandably slow start to proceedings was broken by Steven Bergwijn’s fine solo effort. The Dutch international took advantage of some woeful defending from Manchester United – with a little help from David de Gea between the sticks. All up for grabs in the second half.

41: Interesting to see the Manchester United players swapping positions. Harry Maguire and Victor Lindelof have swapped sides to counter the threat of Steven Bergwijn. Anthony Martial and Marcus Rashford have done exactly the same up front.

Referee Jon Moss awards the first card of the evening to Daniel James for kicking out at Eric Dier. Bit of frustration from the youngster there, who felt he was fouled seconds before that.

39: Not seen much from Anthony Martial or Harry Kane this evening. Both have been virtually bystanders until now.

36: Still no response from the visitors as Jose Mourinho prowls the touchline. Might be the perfect scenario for Tottenham with their goal advantage and pace on the counter.

33: Tottenham looking very sharp over the last 10 minutes. Manchester United on the other hand, have really struggled to get involved. Eric Dier drills a shot into the box which falls for centre-back Davinson Sanchez but the Colombian was offside.

30: Harry Maguire respectfully maintaining the two-metre social distance there. David de Gea has just redeemed himself with an excellent save from Son after a lightning-quick Spurs counter. The United defence are at sixes and sevens at the moment. Uncertain whether to push up or drop off. 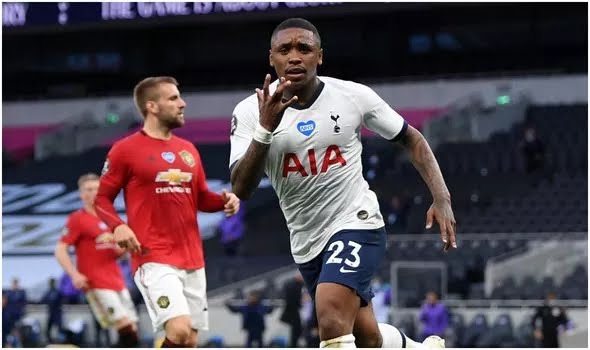 27: GOAL! Steven Bergwijn breaks the deadlock against the run of play to give Tottenham the lead in north London!

Manchester United were enjoying their strongest period of the match but a moment of brilliance from the Netherlands international has Jose Mourinho’s side ahead. The 22-year-old collects the ball about 35-yards from goal before driving forward, waltzing past Harry Maguire and blazing it past David de Gea. The Spaniard could probably have done better, as could the entire United defence.

25: Save! Hey, we’ve had an actual chance. Marcus Rashford gets the ball to feet from Bruno Fernandes via a poor clearance from Davinson Sanchez. His low, well-struck effort is saved by the legs of Hugo Lloris.

… And just as we get a little bit of momentum… there’s a drinks break. I’d understand if it was 30 degrees but it’s not stopped raining since kick off!

23: Around 80% of possession has taken place in the midfield third so far tonight. That should give you a good indication of what’s been happening.

There’s another foul in midfield as Ben Davies brings down Fred. Captain Harry Maguire can be heard shouting ‘Scotty, leave it’ as the Scotland international looks to get involved.

20: New hair, same Erik Lamela. He’s flown in on Scott McTominay and really should receive a caution. Referee Jon Moss gives him the benefit of the doubt – a final warning I’d imagine. Manchester United’s first corner of the evening is swung in by Bruno Fernandes but Son clears.

17: We’re going to need a spark. It’s all a little bit pedestrian. That’s the generous way of saying it’s been a bore. Tottenham are certainly shading it and look the more likely to break the deadlock.

14: Ha! One of the advantages of no supporters inside the stadium is being able to hear what’s going on. Referee Moss to Scott McTominay: “Hey. Calm down. That’s four fouls already.” He’s not wrong – McTominay is putting it about tonight.

11: Spurs look a different animal going forward with Son involved. He’s caused both Harry Maguire and Victor Lindelof a few problems in the early stages – buzzing around and creating space. In other news, Erik Lamela has dyed his hair blonde in lockdown. It’s… well I quite like it actually.

8: Really good play. Really good movement from Tottenham. It’s a very attacking line-up Jose Mourinho has opted for and early indications are that we’re going to see some goals. Davinson Sanchez looks to have fouled Marcus Rashford down the left channel but nothing is given.

5: Not much has happened in the opening stages. Commentator Martin Tyler has been discussing Son Heung-min three-week military service for most of the five minutes It’s been very stop-start with referee Jon Moss blowing his whistle every 30 seconds. These slippery conditions are leading to a few too many fouls.

2: Manchester United are unbeaten in 11 matches in all competitions, winning eight, scoring 29 times and keeping nine clean sheets. Can they pick up where they left off? Spurs… well they had no wins in six.

1: As with all the fixtures on this opening round of Premier League fixtures, the player’s have ‘Black Lives Matter’ on the back of their shirts. Their jerseys also have the NHS badge on. Both sides took a knee before the whistle and clapped for a minute for those affected by COVID-19.

The artificial crowd roar as we get underway. Big game this. Big game, terrible weather and Jose Mourinho looking to ‘get one over’ on a rival. Perfect conditions.