Top 10 Football Stadiums Built on Water. Good field position is critical for controlling a football game and for getting there on time. So, why fight traffic and tailgate on blazing hot asphalt when you can park your boat at the dock, flip burgers on board and then take a leisurely stroll or short shuttle ride to the stadium?

Here are 10 pigskin palaces where, win or lose, you’re sure to have an unbeatable seat before and after the game.

WHERE TO DOCK: Harbor East Marina and Baltimore Marine Centers at Inner Harbor

This city loves football, and it loves boaters who love football, too. You can cruise to the game to cheer on the Steelers or Pitt Panthers several ways by water: Get there early and tie up outside the stadium along the North Shore wall. Take the Gateway Clipper Shuttle from nearby Station Square (it runs every 30 minutes on game days) or opt for the Water Limo Service from Lock One Wall Marina. Heinz Field overlooks the Allegheny River and seats 68,400, including 7,300 club seats and 129 suites. True fans won’t want to miss the on-site FedEx Great Hall, which houses team memorabilia and artifacts along with refreshments from Pub 33, Quaker Steak & Lube, and more.

WHERE TO DOCK: Washington’s Landing Marina

Fall football season can get frigid up north, making a trip to watch the Jaguars in sunny Florida tempting even though the team has never reached a Super Bowl. You can walk to the game from Metropolitan Park & Marina, which boasts 27 acres of beach, picnic areas, trails, and public docking on the St. Johns River shores.  Or pull into one of the nearby restaurants that accommodate boats, such as River City Brewing Company. The venue showcases the world’s largest in-stadium video boards — reaching 60 feet high and 362 feet wide — plus a unique, raised area in the north end zone with cabanas, special food and beverages, and two wading pools.

WHERE TO DOCK: Metropolitan Park Marina

Like Pittsburgh, the city of Cleveland has what could be called a “vigorous passion” for football and boating. The aptly-named “Rock & Dock” at North Coast Harbor Marina offers 53 transient slips near downtown and the Rock & Roll Hall of Fame that fill up early during home games. Can’t find a space? You can still get to the stadium by water aboard the Holiday from Trident Marine Corporation or the Jet Express from Lorain Port Authority. (Bring your cooler on the latter for tailgating at Black River Landing.) FirstEnergy Stadium has 67,895 seats, including the infamous Dawg Pound. Grab a bite afterward at Blue Point Grille or Cleveland Chop.

You’ve heard of the Vol Navy, the raucous group of football fans who congregate dockside at Neyland Stadium to cheer on the University of Tennessee Volunteers during home games. But to hear the Vol Navy in person is something totally different (read: loud). The arena on the banks of the Tennessee River holds upwards of 100,000 people, more than AT&T Stadium where the Dallas Cowboys play, and the atmosphere is well, volatile. Mooring at the docks outside Neyland is on a first-come, first-served basis. Some boats begin arriving as early as Tuesday the week of the game. If you want a surefire slip, book at Volunteer Landing about two miles away, which has a visitors’ center, shopping, restaurants, and a full-service marina.

WHERE TO DOCK: Volunteer Landing Marina

People sometimes forget that Chicago is a water town, and one of the best-kept secrets when it comes to the home of “Da Bears” is that it’s very accessible for boaters. Located just east of Soldier Field, Burnham Harbor offers 1,120 slips in a protected cove on Lake Michigan. Just be sure to schedule your trip early in the season, as the marina closes in October. Seeing a game here is a bucket-list item for many. Soldier Field is the oldest standing NFL stadium in America (opened in 1924) with a long and varied history, having hosted everything from rodeos and stock car racing to rock concerts, circuses, hockey games, and even skiing events.

WHERE TO DOCK: Burnham Harbor

In August 2005, New Orleans was ravaged by Hurricane Katrina, and in the wake of the storm, many thought its signature Superdome would have to be demolished. Instead, the stadium underwent massive reconstruction that added an award-winning lighting system, a brilliant new video scoreboard, completely remodeled concession stands, and kitchens and upgraded club level seats and suites. Now, the home of the Saints is better than ever. The stadium is close to both the Mississippi River and Lake Pontchartrain, the latter offering several full-service marinas on its south shore. Hop a bus or shuttle from the waterfront to the game, then party afterward in the French Quarter.

Tailgating on the Brazos River has become a fun (and big) tradition for Baylor Bears fans in Waco. The Baylor Bearmada has its own website and social media pages, and devotees say there is no better place to watch the March of the Bears — where players and coaches cross the bridge over the boat basin and into the stadium — than from the water. Boat slips are available for lease in the basin, along with free tie-up points along a retaining wall. They fill up fast, so book early if you plan on catching a game. McLane is one of the newest stadiums on our list, opened in 2014, and can seat 45,140 spectators.

WHERE TO DOCK: Baylor Sailgating Marina

Husky Harbor is hallowed ground for fans of the University of Washington Huskies. This cove near the stadium can hold up to 150 boats and has moorage available for the football season. To the east, Lake Washington can reportedly draw upward of 12,000 people during home games. A shuttle boat here starts two hours before each game and will buzz you to and from the stadium. The facility holds more than 70,000 people and features a tailgating area called “The Zone,” with food, games, and entertainment. The venue’s open design overlooks the water and the Cascade Mountains, providing one of the most majestic views in football.

WHERE TO DOCK: Husky Harbor 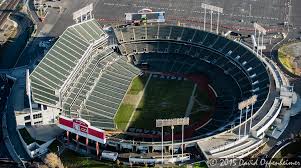 If you want to experience a football game at the Oakland-Alameda County Coliseum, you better make it fast. This will be the last season the Raiders play here before moving to Las Vegas in 2019-2020. You can avoid car traffic in the area by docking at SF Marina Small Craft Harbor in San Francisco’s historic Marina District and then taking a BART train from there to the game. Audiences numbering nearly 100,000 have made the Coliseum a landmark, with bands like The Grateful Dead, The Rolling Stones, The Eagles, and Led Zeppelin having graced the stage. The stadium has a liberal food policy, and you are allowed to bring a soft-sided cooler with snacks and non-alcoholic drinks.  Or grab the lauded garlic fries from a concession stand.