Manchester City and Algeria forward Riyad Mahrez has congratulates Liverpool and Senegal forward after he was announced as the winner of African Player of the Year award 2019 and as well apologize for not making it to the CAF Award in Egypt on Tuesday Night.

thescoreng reports that Mahrez and duo Mane and Salah were the three-man final shortlist for the CAF awards, luckily for Sadio Mane to beat his club teammate and Man City forward Riyad Mahrez to win the African Player of the Year award.

Mahrez didn’t make it to the CAF awards ceremony on Tuesday night because he has been included in starting XI line up against Man United in the Carabao Cup 1st leg semifinal.

Mahrez scores City’s second goal against the Red Devils as Pep’s side defeat Manchester United 3-1 at the Old Trafford.

Mahrez has taken to his Twitter page to congratulates and apologize for Mane not to make it to the CAF awards. 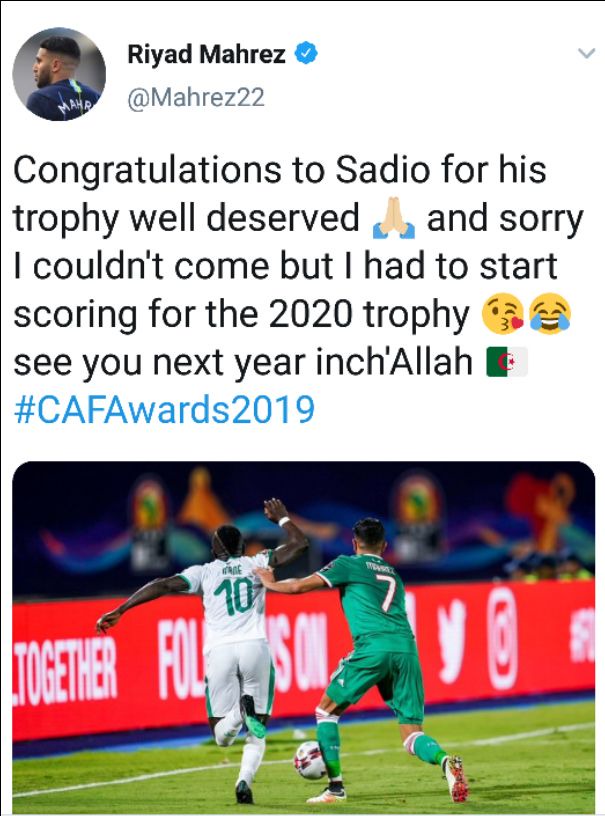 He said “Congratulations to Sadio for his trophy well deserved 🙏🏼 and sorry I couldn’t come but I had to start scoring for the 2020 trophy 😘😂 see you next year inch’Allah 🇩🇿 #CAFAwards2019.”

Mane recorded his first African player of the year award after beating his club teammate Salah and Man City forward Mahrez to win the award in Egypt.

The Algeria star also said that he had to start scoring for the 2020 trophy as he apologize “sorry I couldn’t come”.

The Senegalese star also qualify his country to the final of Africa Cup of Nation 2019 in Egypt but lost to Algeria.

Congratulation to Sadio Mane as the current holder of African Player of the Year award for 2019.