Juventus star and former Manchester United winger Cristiano Ronaldo has revealed why he cried after penalty missed in the UEFA Champions League final against Chelsea, which took place on Wednesday, 21 May 2008, at the Luzhniki Stadium in Moscow, Russia.

Cristiano Ronaldo opened the scoring for Manchester United in the 26th minute with a header from a cross by Wes Brown, but Frank Lampard equalized shortly before half-time.

The Score Nigeria recalls that 12 years ago, Manchester United and Chelsea played 1-1 draw after extra time before the match goes into a penalty shoot-out.

Portuguese and Juventus star Cristiano Ronaldo revealed why he broke down into tears after penalty missed.

” I don’t know what has happened to me that night, I am scared and full of tension anyway I don’t believe myself missing penalty against Cech. Immediately I think the dream was over and broke down into tears, I never gave it a second thought after missing the penalty in the UCL final against Chelsea at the Luzhniki Stadium in Moscow, Russia”.

Credit to Edwin Van Der Sar who saved John Terry’s slipped penalty to level the shoot-out score to be 5-5, and as well Van der Sar then pulled off the crucial save for United; he pointed to his left to indicate to Nicolas Anelka that he thought he would kick to that side, as had the six players who had kicked before him, only to correctly dive to his right to deny Anelka, whose kick was at a good height to be saved, securing European football’s top prize for United for the third time in their history. 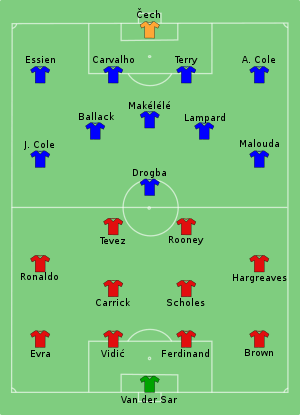 “12 years ago, Cristiano Ronaldo missed his penalty and thought he fluffed his lines. 5 minutes later he was a Champions League winner. What a team we had.”

12 years ago, Cristiano Ronaldo missed his penalty and thought he fluffed his lines. 5 minutes later he was a Champions League winner. What a team we had. [Cr7fBm] pic.twitter.com/GdE6rOw54G

Van Der Sar took to Twitter to remember the glorious day, “#OnThisDay in 2008! We will NEVER forget that rainy night in Moscow…”