Brazilian international and Chelsea midfielder, Jorge Luiz Frello Filho, best known as Jorginho has been rumoured to completed 4, 000 passes without a single assist in his football career. The 28-year-old has been linked with Juventus for a possible move to the Italian giants on the summer transfer window.

According to the reports gathered by The Score Nigeria, Jorginho was born on 20 December 1991 (age 28 years), Imbituba, State of Santa Catarina, Brazil. The 28-year-old began his football career as a youth player in Hellas Verona. In June 2010, Jorginho was loaned out to Serie C2 side, A.C. Sambonifacese, where he played his first full senior season for the Veneto club appearing 31 times and scoring one goal whilst providing ten assists from his central midfield position.

Does Chelsea Midfielder, Jorginho Completed 4k Passes Without an Assist? Of course, the answer is obvious having go through where Jorginho began his career as a footballer there is no sign of him completed 4K passes with a single assist.

On 18 January 2014, Jorginho joined Napoli in a co-ownership deal with Verona for four and a half years contract deal. He makes Napoli debut on 12 February, he scored the last goal as Napoli overturned a 3–2 first-leg deficit to beat Roma and reach the 2014 Coppa Italia Final. In the final, on 3 May, Jorginho played the full 90 minutes as Napoli defeated Fiorentina 3–1.

On 14 July 2018, Jorginho signed for English team Chelsea on a five-year contract on the same day as Sarri was hired at the club. He joined for a transfer fee of £50m with £7m in potential add-ons and was assigned the number 5 shirt. 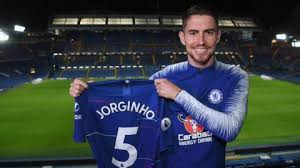 He currently plays for Chelsea as the Italian giants Juventus has made a fresh bid to sign the 28-year-old Brazilian international to Allianz Stadium this summer.